The best baby swaddle will help your baby feel safe, warm, and secure and therefore, they will be much more likely to sleep well. Swaddling is a practice that has been used for years to help babies sleep more soundly. Here we will review the best swaddles for 2021.

The reason for swaddling your baby is that it helps reduce the startle (moro) reflex which is an involuntary response to being startled by anything from a sudden noise to no reason at all. The best swaddles wrap your baby securely from the neck down so that their arms and legs are tucked in tightly.  This imitates what it is like in the womb for the baby with little to no room to move around. As this is what your baby is used to, it helps them to feel more secure.

The startle reflex usually disappears by 3-6 months but it is important to note that once your baby starts rolling, they need to have their arms free in order to stay safe.

What types of Swaddles are there?

Here are our top picks  for best baby swaddles in 2021 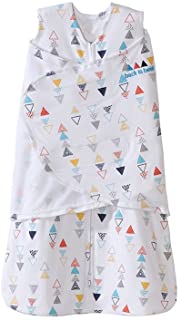 This swaddle is a popular choice among new parents as it is so versatile. This 3 way swaddle can be used with arms in to prevent the startle reflex, hands out for self soothing, with one or two arms out for transitioning out of a swaddle.

The Halo Sleepsack is approved by the International Hip Dysplasia Institue as “hip healthy” as it is looser around the legs.

The Halo is an easy to use option for a swaddle with a an inverted zipper for easy diaper changes and adjustable fasteners for a snug fit.

One thing a few parents mention about this is that the velcro is rather loud which can wake a sleepy baby.

For Self Soothing – Love To Dream Swaddle Up 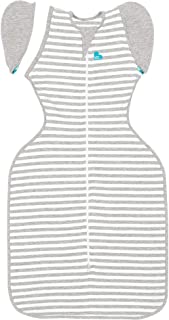 This easy to use swaddle is loved by parents for its simple design. A single zip up the front and you are all done, no wrapping extra layers or loud velcro.

As many babies love to sleep with their arms up by their head rather than by their side or on their chest, this design is perfect. A lot of infants like to suck on their fist which they can do through the fabric and therefore offer themselves comfort while drifting off to sleep.

The two way zipper allows for easy diaper changes and the design is approved by the International Hip Dysplasia Institute for healthy hips.

The Love to Dream swaddle is available with zippered wings for transitioning to hands out as it should be noted that once your baby starts to roll they need their hands free.

While this swaddle mostly receives praise from parents, some note that the neck hole is too small.

For a Personalized Fit – Miracle Blanket 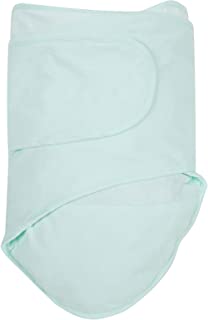 As this swaddle has no zips or velcro, it can be adjusted to the size of your baby easily. It is a pouch with long wings that you place your baby in and then wrap the wings around to suit your child. It can take some getting used to fitting it securely but once mastered, should be easy to use. You can wrap your baby with arms up or down.

It is 100% cotton so should feel soft and cosy next to your baby’s skin.

The main downside to this swaddle is that you need to remove the whole thing for night time diaper changes.

To Grow With Your Baby – Woombie Grow with Me Swaddle 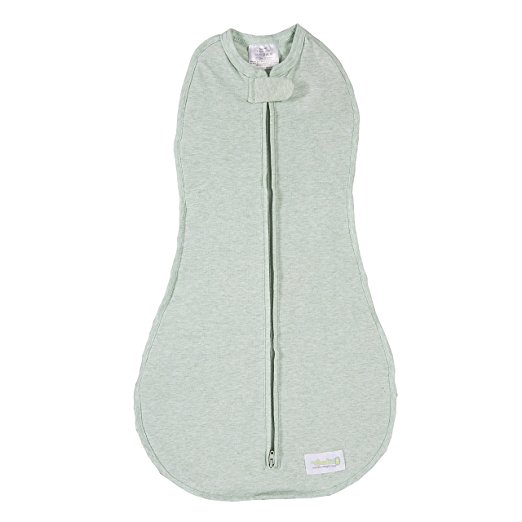 This swaddle is great if you want one that you can use as your baby grows. It grows into 3 multi-sized swaddle variations and then evolves into a large or extra large arms free bag. Therefore there is no need to buy new swaddles as your baby grows.

The great thing about this one is it was designed by a nursing team and encourages back sleeping. The stretchy but snug fit moves with the baby, recreating the feeling of the womb. It also simulates the feeling being held, touched and cuddled. This is sure to encourage restful sleeping for your baby.

The fabric promotes gentle air flow and it is hip and shoulder friendly. While some babies will love the stretchy fabric that allows them to move, it may not suit all babies.

Most Affordable – Swaddle Me Original Swaddle

As this swaddle comes in a pack of three, it makes it an affordable option. Having a spare or two can be a lifesaver if your baby is prone to reflux. Or any other multitude of reasons why you may suddenly need a spare during the night!

Parents love that it is easy to use, just pop baby in the pouch and fold over the arms. The downside of this it that you need to undo it for middle of the night diaper changes. It is also not able to grow with your baby, you will need to buy the next stage once your baby starts rolling. 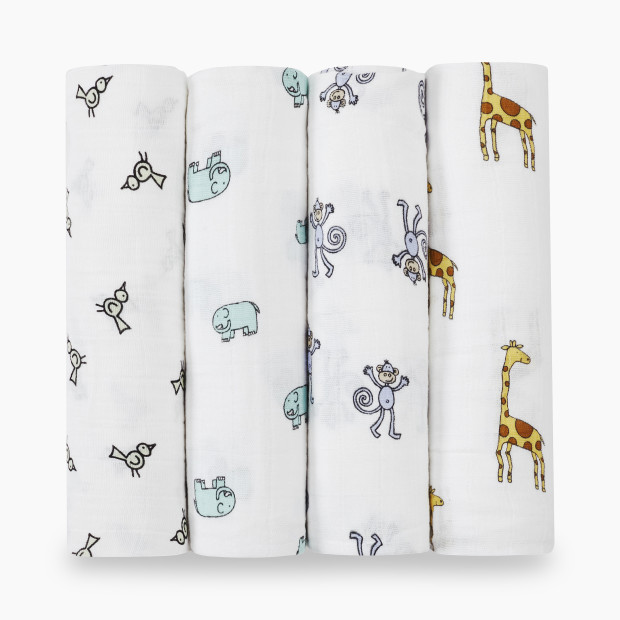 As these swaddles are just a square of muslin, they can be used as swaddles or for many other purposes. As a blanket, burping cloth, nursing blanket, or playmat. This means that you will be able to use them long after your baby no longer needs swaddled.

This kind of swaddle is good for people who know how to swaddle using just a piece of fabric but may not be so good if you don’t have the art of swaddling down pat. If you have a particularly wriggly baby then it may not work for you as they are more likely to wriggle out.

If you love Aden and Anais but find these too difficult to use, they also offer a wrap swaddle and a snug swaddle. 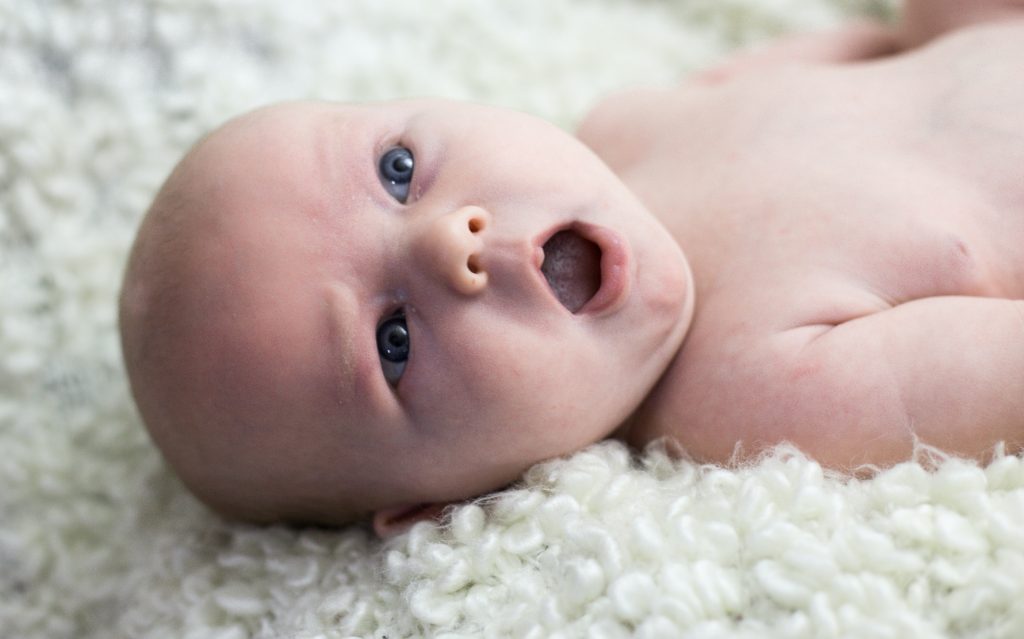 We all know that babies sleep a lot but why is it so important for their development that they get enough sleep?

The transition out into the world is an exhausting and overwhelming one for babies. They are in a period of rapid growth and development, particularly their brains, and sleep is when most of this development occurs. Children’s bodies produce growth hormones when they are asleep and as anyone who has a newborn knows, they are growing rapidly at this stage of life. Your babies brain will double in size during the first year of their life and most of that growth will occur while they are asleep.

Why Sleep is Important for babies Development

Babies need 14-18 hours of sleep a day depending on their age.  As mentioned before, most of the babies brain development happens while they are asleep.  This is when the connections between the left and right hemispheres of their brains are being formed. Brain synapses are being formed during sleep, more than a million neural connections are formed per second during the first 3 years! Memories are formed and stored during sleep. It also helps boost immunity. Therefore sleep is so important for babies development.

Everyone cycles through different types of sleep during the night and also during naps. From about 6 months of age, a sleep cycle consists of REM sleep (Rapid Eye Movement) and non-REM sleep.

In REM sleep your eyeballs flicker from side to side underneath your eyelids. This is also called dream sleep.

During Non REM sleep, you can either be in deep sleep or light sleep.

The amount of REM sleep and Non REM sleep in a cycle changes through the night.

Children have more REM sleep and light non-REM sleep in the second half of the night. Children wake more easily from these kinds of sleep, so they might wake up more during this time than at the beginning of the night.

Sleep issues can arise when babies wake after a sleep cycle and are not able to settle straight into another.

How can I make sure my baby gets enough sleep?

If you’re worried your baby isn’t sleeping enough, don’t panic – they’re not in for a lifetime of developmental issues just because they’ve fought off a few naps or refuse bedtime.

It will take some time to figure out how your baby’s sleep cycle works. You can, however, start to instill some good sleep habits that will help them get enough rest from day one. Even though there might not be a set pattern or routine to your baby’s sleep immediately, you’ll probably notice the eat-sleep-play cycle. Try logging these activities to inform activity throughout the day.

You can also start with a pre-sleep routine. Once your baby’s sleep becomes less erratic and they have a more consistent bed time, this can become your bedtime routine.

If you are worried that your baby may not be getting enough sleep or isn’t sleeping all night, check out our article on how to help your baby to sleep all night.